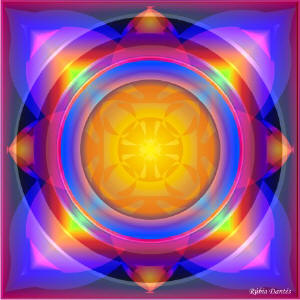 One of this night I couldn't sleep and... taking the opportunity, my mind began to travel in the past and bring up old situations. and on the track of the thoughts came other paths that would have my life -if- I had had other choices... and in the way of "If" other situations came and other possible paths, but they were not chosen, also manifested in my thoughts... And every different possibility of choice, more possibilities of paths opened. It made me travel on roads not travelled yet. These ones, at the beginning were attractive and amazing, but they brought me little by little tiredness and all weight that didn't seem to match the images that appeared...
That's when I was saved by a voice which it seemed, it was above the thoughts and said: "If" does not exist and just keeping you in the past.
It was like magic and popped a huge relief and a deeper understanding... Along with the image of all previous thoughts falling apart, as if they were stuck in glass boxes shattering. When this voice arose, brought the lightness of seeing many colours coming free to smash the glass that arrested them... the colours that were arrested in each compartment, free, they formed a beautiful image... of energy and vibration.
Today I woke up feeling stronger and somehow with more power to act here and now. We've got things to do, whenever we think about how things would be -if- we had done differently than we did. That "If" is a way of arresting us in the past, avoiding the present- and everything it represents. I believe that all paths we haven't done, they were not to be driven, or they did not offer the best teachings we needed to evolve. I think our consciousness takes us where we need to go - to encourage and release standards which imprison and limit us... and many times, the paths considered by our ego as "the worst" or "the best", they are not what our Soul would take us to follow.
I understood once again, what was not resolved in the past, it holds precious parts of our energy that cannot be used in the present...
Our power of action is always here and now, and never on paths, we did not live in the past.
In some magic way, that voice and that image of the glass breaking, freeing colours, led me to a deep acceptance of my choices which brought me here... being exactly who I am now.
Many times, we think, mistakenly, that if we had done other different choices we wouldn't have the challenges we've gone through... for our imagination, everything is flower in the ways we didn't choose.
But, we know better than that... If we came here for a learning and if for that we need to be picked at by certain challenges, in any path, they would be appear until we release.